Our Garden Glossary is a continuously growing list of terms designed to help all of us searching for more truth in nature. Please help us add to it by contacting us.

ANNUAL
A plant which completes its life cycle in one growing season. Most of the plants in our annual garden packs are annuals with the exception of the Heliopsis, Salvia, and Agastache which are fast growing, long blooming perennials in our climate. Annuals grow very quickly from seed and flower non-stop from mid summer through frost. Frost kills them, at which point they need to be removed from the garden and composted, much like vegetable plants, which are also mostly annuals.
Credit: M. Herndon
B

BIOCONTROLS
The use of a pest insect’s own natural enemies (predatory insects and mites) to depress its population in a nursery setting. The natural enemies are called "biological control agents," or sometimes "biocontrol agents."
Credit: M. Herndon
BIODIVERSITY
Biodiversity encompasses the genetic variety within and among species and the variety of ecosystems that species create. Biodiversity has a history of being negatively affected by human activity. One of the criticisms of the horticulture industry in general is that the same 30-45 types of plants are frequently planted en masse all over the county at people’s houses, in parking lot islands, and along highways. At Plant Me A Rainbow, we create regionally specific gardens using plants mostly grown from seed in an effort to increase biodiversity in the home garden.
Credit: M. Herndon
C

CLIMATE ZONE
The USDA divides the US into different climate zones based on warmest and coldest temperatures during the year and number of days in the growing season. The northeast region is composed of climate zones 3-6, zone 3 is Northern Vermont, zone 6 is parts of Maryland and Pennsylvania. Most of the northeast is zone 5. Much of what makes a plant an annual or perennial has to do with how much cold it can tolerate, which is why some of the ‘tender perennials’ are treated as annuals by some growers.
Credit: M. Herndon
CULTIVAR
Cultivar is a variety or sub-variety of a plant species that was developed under cultivation and is propagated for a specific trait(s). Cultivars labeled ‘Seed Cultivar’ or ‘Open Pollinated’ produce offspring from seed that is like the parent, these are genetically variable. A majority of cultivars available in the trade, however, are propagated vegetatively meaning every plant with the same name is genetically identical. Plants in Plant Me A Rainbow’s kits that have three names (ex. Heuchera macrorhiza ‘Autumn Bride’) are cultivars.
Credit: M. Herndon
D
None yet.
E

ECOLOGY
The study of the relationships between organisms and their environment. Some of the most pressing problems in human affairs - expanding populations, food scarcities, environmental pollution including global warming, extinctions of plant and animal species, and all the attendant sociological and political problems - are to a great degree ecological.
Credit: M. Herndon
F
None yet.
G
None yet.
H

HYBRID
A hybrid is a plant with two or more species or cultivars as parents. Many hybrids have long and complex backgrounds that involve breeders, and multiple species. For this reason they do not have a species name. Hybrid plants in the perennials garden kits include Anemone ‘Honorine Jobert’ and Geranium ‘Rozanne’ the Dahlias in our Dahlia trays are hybrids as well. In order to propagate hybrids, they must be divided, or grown from cuttings. Like vegetatively propagated cultivars, every plant with the same name is genetically identical.
Credit: M. Herndon
I

INTEGRATED PEST MANAGEMENT (IPM)
IPM is a series of pest management evaluations, decisions and controls that, when used in combination with the best available control tactics, result in managing pest damage by the most economical means and with the least possible hazard to humans and the environment.
Credit: M. Herndon
J
None yet.
K
None yet.
L
None yet.
M
None yet.
N

NATIVE PLANT
A plant that is a part of the balance of nature that has developed over hundreds or thousands of years in a particular region or ecosystem. Note: The word native should always be used with a geographic qualifier (that is, native to New England [for example]). Only plants found in this country before European settlement are considered to be native to the United States. As a geographic qualifier, Plant Me A Rainbow provides the state of origin of the seed of our native plants to the extent possible.
Credit: M. Herndon
NEONICOTINOIDS
a group of systemic insecticides that includes acetamaprid, imidacloprid, dinotefuran, clothianidin and thiamethoxam. They gained popularity in ornamental production because they are effective against a wide range of insect pests, and are considered less hazardous to humans and other vertebrates than many previously used insecticides. However, they are designed to act against chewing and sucking insects, which includes bees and butterflies. Neonicotinoids have been implicated in colony collapse disorder among honeybees, and are banned in Europe. Systemic insecticides travel throughout a plants vascular system and stay active in all parts of the plant, including its pollen and nectar, for up to 3 years. Plant Me A Rainbow’s plants are Neonic free.
Credit: M. Herndon
O
None yet.
P

PERENNIAL
A perennial is a plant that persists for more than 2 years. Our designed garden kits are comprised of perennials. They are planted once and are an investment for the future. Unlike building a new home or completing a renovation project, which looks best the day it is complete, perennial gardens look best with age, and really come into their own when they are about 3 years old.
Credit: M. Herndon
PROVENANCE
The location where seeds or cuttings for a specific plant were originally collected. In an effort to define where plants are from, we provide as accurate information as we can about each plant’s provenance. Because of our commitment to a naturalistic, biodiverse, healthy landscape, we aim to provide designed garden kits composed of at least 70% species from our region of the US. Our sun and part sun perennials mixes are currently 80% native to the midwest and northeast US with, in most cases, state specific provenance information available per species.
Credit: M. Herndon
Q
None yet.
R
None yet.
S

SEED GROWN / OPEN POLLINATED
Because plants grown from seed have two parents, they are genetically variable and contribute to a biodiverse population. This is the only propagation method in which offspring are not identical to each other. Populations of the straight species of New York Aster, for example, may display varying shades of purple, slightly different heights, slightly different bloom times and durations, etc. When viewed in a field, these variations are imperceptible. Diversity in plant populations can lead to overall longer flowering periods, which is aesthetically beneficial as well as beneficial for pollinators seeking food sources. A diverse population is also more resilient in the face of challenged growing conditions. Some individuals will be more drought tolerant, some more cold tolerant, etc.
Credit: M. Herndon
SPECIES
A group of closely related plants that are very similar to each other and are usually capable of interbreeding and producing fertile offspring through seed. This is the most genetically variable type of plant we sell and is the core of the carefree, regional aesthetic we strive to create. In a marketplace where many plants are the result of intensive breeding and have three names, ie: Aster divaricatus ‘Eastern Star’. A straight species plant does not have a name in single quotes. For example, it will simply be Aster divaricatus.
Credit: M. Herndon
T

TENDER PERENNIAL
A tender perennial is one which is unable to survive the winter in a particular growing zone unless given special protection or treatment; however, in its native habitat it will continue to live for more than 2 years. The Rudbeckias in our Sunflower kit as well as our Dahlias are examples of tender perennials. In order to protect Dahlias and grow them again next year, a few steps need to be followed. After Dahlias have received 2-3 killing frosts, their tubers can be dug, divided, stored for the winter between 40 and 50 degrees, and planted out again in the spring. This is a labor of love and can be a cold job in late fall but it can also be a very rewarding process. It is worth leaving Rudbeckia in the ground the first year after planting to see whether it will return as a perennial. If your garden is in a sheltered spot, or if you’re located closer to the Mid Atlantic, it’s possible that some of the plants will return, especially if you cover them with 4-6” of composted leaves over the winter.
Credit: M. Herndon
U
None yet.
V

VARIETY
A naturally occurring variation of individual plants within a species. The distinguishing characteristics are reproducible by seed in offspring. For example, Heuchera americana ‘Dale’s Strain’ is a plant that was found and named by a propagator. It was growing naturally in the Blue Ridge mountains of North Carolina and displayed beautiful foliage and drought tolerance. It’s traits are reproducible from seed, and it is slightly distinct from other members of the species. Vegetative Propagation - a method that produces plants that are genetically identical to their parents. This method is used for maintaining the distinctive traits of a cultivar that does not come true from seed. Stem or root cuttings, or divisions, from healthy stock plants are taken, treated with a rooting hormone, and maintained at temperature and humidity levels that allow the cuttings to root and form their own plants.
Credit: M. Herndon
W
None yet.
X
None yet.
Y
None yet.
Z
None yet.

"Beauty is truth, truth beauty,—that is all Ye know on earth, and all ye need to know."
-Ode on a Grecian Urn by John Keats 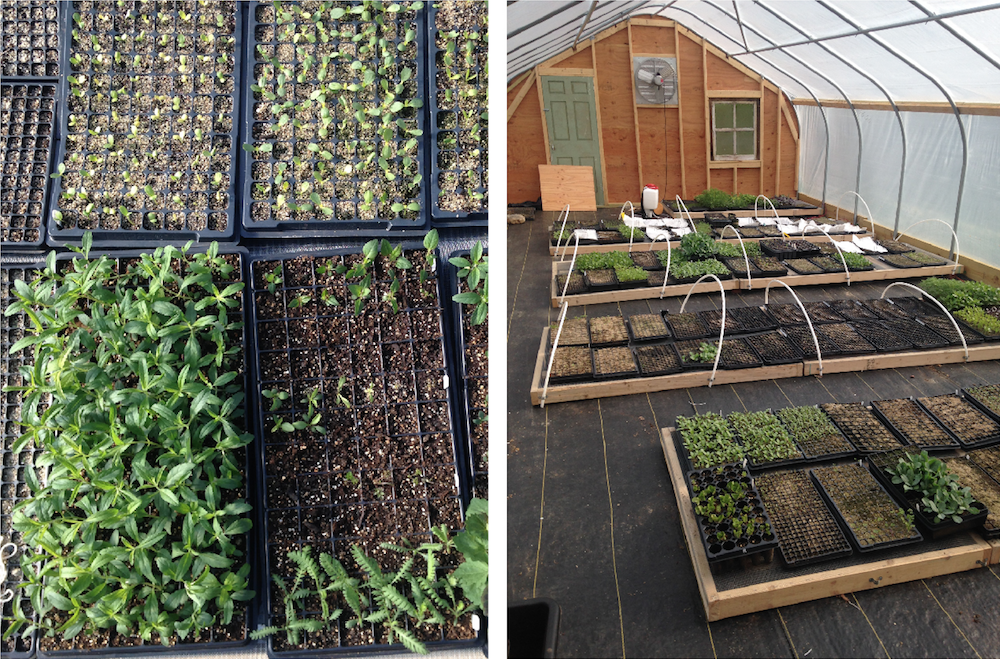 About Us
Questions & Answers
Shipping & Returns

Please check your email in a few mintues for confirmation.
Thank you!